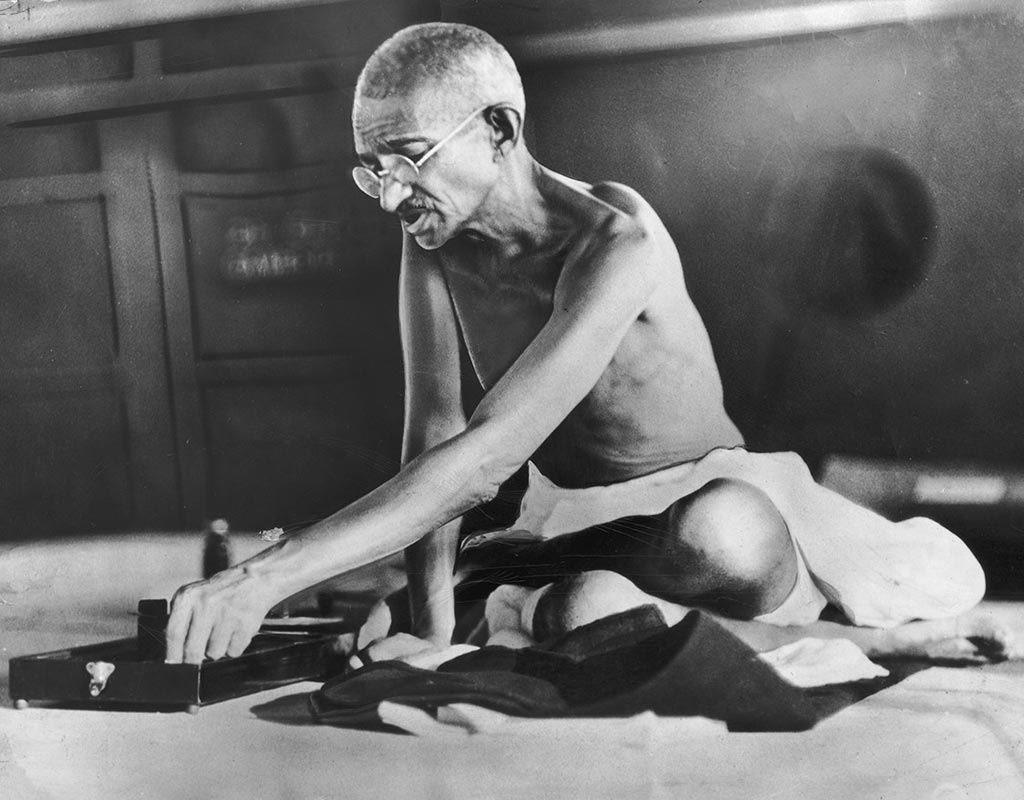 His Law firm set-up in Bombay failed miserably, owing to his lack of expertise, so he returned to Rajkot – somewhat dejected. He marked his career, by drafting petitions to litigants which helped him bring in funds.  But, things came to a halt even on that front, when Gandhi had to forcibly stop his operations owing to a conflict with a British officer. One thing led to the other, and the next thing was landing a job in the Colony of Natal, South Africa as a lawyer.

While Gandhi’s work cannot blatantly be attributed as that of a crusader without any violence, he deserves due credits for being the first Indian to apply and implement the principles of non-violence in the political arena. Non-violence considered the highest ethical virtue (dharma) is explained in great detail in his autobiography, The Story of My Experiments and Truth. The views were met with severe flak in Britain when it was under attack from Nazi Germany and post the revealing of the Holocaust.

His popular words, to the masses of Britain, is what will resonate in the patriotic hearts of millions of Indians. The quote, “I would like you to lay down the arms you have as being useless for saving you or humanity. You will invite Herr Hitler and Signor Mussolini to take what they want of the countries you call your possessions. If these gentlemen choose to occupy your homes, you will vacate them. If they do not give you free passage out, you will allow yourselves, man, woman, and child, to be slaughtered, but you will refuse to owe allegiance to them.”

He is known for his values:

Ahimsa / Non-Violence: It has been a bumpy ride throughout for Gandhi, who nevertheless persisted. From being criticized for refusing to protest the hanging of legends like Bhagat Singh, Sukhdev, Udham Singh among many others to being accused of accepting a deal with the King’s representative Irwin that released notorious leaders from prison.

Satya /The Truth: It is a well-known fact that Gandhi earned his title as the father of the nation owing to his unrelenting pursuit of discovering the truth. His movement, popularly called Satyagraha; found its first formulation in 1920. The move is centered around the mantra of resolution of non-cooperation.

It has been claimed that it was the satyagraha formulation and step, which found a strong connect with the beliefs and culture of the masses that garnered acclaim and support; ultimately earning him the title of Mahatma. Satyagraha is built on the Vedantic ideas of four principles – self-realization, ahimsa (nonviolence), vegetarianism, and universal love.

As per a report on Wikipedia, according to Indira Carr, Gandhi’s ideas on ahimsa and Satyagraha were founded on the philosophical foundations of Advaita Vedanta.

Niswarth Seva / Selfless Service: History is laden with instances, where it has been reported and recorded that, on several occasions, Gandhi faced and had to endure severe forms of humiliation and torture at the hands of the whites. But, in a perfect move of sorts, Gandhi bore the insults, without trying to avenge those who harmed him.

Aside from the fact that he did not want the unjust oppression to continue on the non-whites; he resisted the wrongdoings of the whites all his life. Some of the lesser known facts are that he was popular for offering shelter to a leper. He also made conscious efforts to spend time with the sick and dying at a hospital in Natal.

Gandhi also served in the Ambulance Corps during the phase of the Second Boer War in 1899, where he spread the message that ‘service is meaningless unless one takes pleasure in it.’

Indeed true, as he always maintained that services offered without pure joy served neither the servant nor the served.